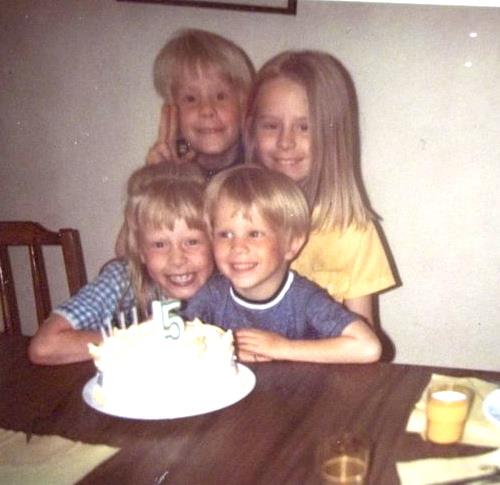 The other day I was sent a “Snap” of my grandson.  I thought it was especially cute and I asked if it could be sent to me via text message so I could watch it again later.  “Snaps,” you see, go away after a day.  Turns out the snap had not been saved and there was no way to save it.  It was cute and now it is gone.

It got me thinking about how we document our lives and how that has changed.  There is no doubt that our children’s lives are documented.  Well documented.  Maybe OVER documented.  Just look at the six tubs of photos Scott and I have to prove that.  I don’t think we are unique.  I bet a lot of parents from our generation have similar tubs.  I blame it on the evolution of photography.  We did not have digital photography.  No checking and discarding the “bad” pictures.  In fact, we would take multiple shots of the same subject, in the hope that ONE of them would be “good.”  To top that off, for another .50 cents, you could get “doubles.”  You sent off the roll of film, waited two weeks then went to the photo lab to pick them up.  Many, many, many of the photos were bad.  A few were good, and maybe some of the duplicates went into a pile to send Gramma and Grampa.  Most got tucked away.  Hence six tubs of grainy, off center photos.

My parents on the other hand took so few pictures.  They were busy.  My mom was an RN, my dad a meteorologist for the weather service.  He worked with air traffic control creating flight plans for airplanes.  They both had high stress jobs and worked weird hours.   My parents were too busy to pull out the camera regularly.  I am not saying that our birthday parties were not documented, for the most part they were.  Sometimes.  There were  a few Christmas morning pictures.  Some scattered camping trips.  Vacations.  One or two Thanksgiving dinners. Special occasions.  But how I would have loved a picture of my family in the grocery store, or playing in the yard or simply playing a game or watching TV.  I miss the details of those simple things – it is not just the photos that are blurry, my memory is also *just a little* blurry as well.

I can just see the grocery store photo now.  My mom shopped once a week.  We spent 250.00 per week on groceries.  That was a lot back then. Three gallon jugs of milk.  A loaf of bread for the bread box and two for the freezer.  A jar of Jiffy. Three cans of frozen orange juice.  A few heads of iceberg lettuce, maybe some radishes, a cucumber or two.  There were boxes of pasta, jars of Ragu, some onions, a roast or a few pounds of hamburger.  Our meals were not varied.  Spaghetti.  Roast Beef.  Pineapple Chicken.  Seriously, that is all I remember eating.

So I picture us there, in the grocery store, cart piled HIGH, us being dragged along.  My mother runs into someone she knows, often several people.  She talks.  For a long time. We are brats.  She gets mad.  The very worst thing, the thing that lets us know we are in for it, is if she dumps the cart.  If she walks away from that cart and heads for the car, you better be scared.  I honestly don’t know what was so scary.  It is not like we would get spanked, or even yelled at, my mom was not really a yeller.  I don’t know.  It was just scary.

My mom was funny though and this might have made a funny little video.  It sounds BAD in hindsight, but she and my littlest brother had a gag where she would pretend to get mad and choke him.  Usually in the freezer aisle. She would put her hands around his neck and he would pretend to gasp and choke and flair.  I don’t know why, but that killed us.

Another day to day scene I would have loved to see a photo of is the six of watching TV piled on that hideous orange plaid couch.  That couch has made several appearances in other memories I have written about, so it must have been a big deal. I know that a picture of us watching TV sounds boring, and it sounds like we watched a lot, but we didn’t.  Sunday night it was “The Wonderful World of Disney.”  Or later, “Eight is Enough.”  (Side-note. We were one of those families that took Sunday night baths, first the girls, change the water,  then the boys.  That was it, total hygiene/bathing program.  A bath a week.  Out of the bath, Disney then bed. That was our routine. Of course as soon as each of us got older we moved to more regular showers and no more shared bathing!)

When I see a photo from my childhood I scan it like a detective.  I am trying to get that insight to what those day to day things were like.  My memory is so cloudy.  In one picture, the four of us kids are crowded around our dining table.  It is my sister’s birthday.  The picture perfectly captures our personalities.  I am tweenish and manage a smile. Ray has a half grin and is waving to the camera in a goofy “I’m a good guy” pose, Bonnie has a huge smile and twinkly eyes and Randy is looking off to side with a friendly smile.  There, next to cake is a paper napkin, a glass of milk in a orange plastic cup and a Corelle plate with blue trim and immediately I am taken back to dinners around that formica table.  Simple meals, iceberg lettuce “salad,” some canned green beans and a slightly dry pork chop.  Maybe even a slice of buttered bread.  Dinner at the Finches, served at 6:30, don’t be late. Dinners where we all talked so fast, and over each other, that no one really listened.  I couldn’t tell you a single thing we talked about.  Combat eating to get seconds because my brothers ate so much.

I don’t think my kids or my grandchildren or generations to come will have to be detectives to piece together the day-to-dayness of their lives.  They will have easy access to it, right there on the internet, on social media, even if they never print out a single picture.   I think back to my parents who sent my grandparents a school photo every year. That and a visit every other summer, that was it.  We didn’t call, long distance was too expensive, and it was like pulling teeth to get us to write an actual letter.  I love having a grandchild in the digital age, I see something – EVERY SINGLE DAY.  I have watched him develop and grow and now he plays peek-a-book and fakes sneezes with me on FaceTime.  I am truly blessed, even if the occasional Snap “goes away.”

One thought on “To Take a Picture”